Áfram Stelpur! - Iceland is once again in the Euro Finals

The Icelandic women's national football team will be playing in the UEFA Women's Championship in July. This is the second time the team competes in the European championship finals, and this time hopes are high.

It is safe to say that the Icelandic nation is excited for the finals. The team is strong, and there is much optimism about getting good results.

Quality players in every position

Over the past years the Icelandic team has been improving steadily and is currently ranked number 17 on the FIFA Women´s world ranking. 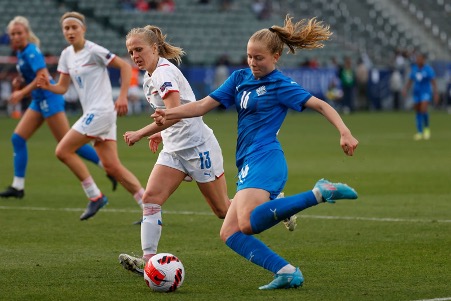 The team has quality players in every position playing for some of the biggest clubs in Europe. Including Juventus and AC Milan in Italy, West Ham United in England and Wolfsburg and Bayern Munich in Germany.

Iceland is in group D along with Belgium, France, and Italy. The first match is on July 10th against Belgium. Second match is against Italy on July 14th and the final match in the group stage is against France on July 18th.

A new football madness in Iceland

Getting to the finals on an international level in a major sport is always a great achievement. Especially for a small nation like Iceland. That's why we enjoy every second of it and fully support our team the entire time.

With the upcoming tournament, Iceland is entering a new football madness where the nation unites in celebrating and supporting the team.

When it comes to our national teams, we are known to turn every match into a national celebration, where families, friends and co-workers gather and watch together. It is expected that up to 90% of Icelanders will wear the blue shirt and watch the matches.

Women's football on the uprise

Women's football popularity has been growing rapidly. As an example, a global attendance record for a woman´s football match was set in March this year, when 91.553 people saw Barcelona beat Real Madrid in UEFA Champions League quarter finals.

Not so long ago the men's national football team caught the attention of the world by its performance on the international stage. First by making it to the quarter finals in the 2016 UEFA finals after beating England in the round of 16 teams. Then again in 2018 when Iceland became the smallest nation to compete in the FIFA World Cup Finals.

Believe in the Icelandic craziness

Icelanders are extremely proud of their team and their success. According to recent polls both interest and optimism for the women's national football team is at an all-time high.

We are confident that the team will do well and there is no lack of support. We might be a small nation but with the Icelandic craziness as our guidance and quality of the team we believe we can do anything!