What is Brennivin schnapps? AKA “Black Death”

Black Death was a nasty plague and luckily, our Brennivín booze has nothing to do with the pandemic. 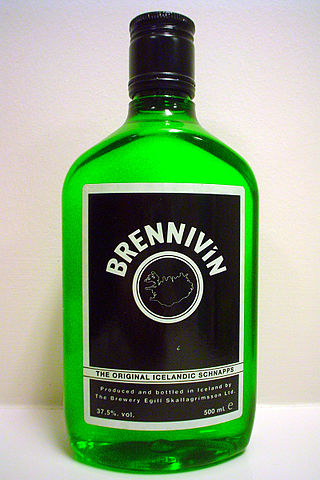 Why the strange name?

Brennivín roughly translates into “Burning wine”. The Black Death nickname comes from the old days when prohibition was lifted in Iceland and the State Alcohol Monopoly out it on the market. Apparently, they wanted to make the drink sound as bad as possible, hence the green bottle and harsh label. But, Icelanders drank Danish Akvavit way before that, so we’ve obviously had a taste for it for a long time.

Like many of Icelander’s food and drink related obsessions, it has a liquorice or anise kind of taste with caraway and cumin flavor as well. It has a very strong taste and not everyone’s a fan. People don’t really sip it for the pleasure of it, but more as part of tradition and novelty. When we have our famous “Þorrablót” festival in winter, Brennivín is usually served alongside all the fermented food. The all-time favorite combo is the “Hákarl & Brennivín”, rotten and fermented shark with Brennivín.

What is Brennivín made of?

Brennivín is a distilled schnapps made of fermented potatoes and flavored with caraway seeds. It’s similar to Akvavit. The alcohol content of Brennivín is 37.5% or 40%.

How is it served?

In Iceland, we usually like to drink it dry, but most like it frozen since it stings a little less that way. In recent years, Icelandic bartenders have been a little more creative in making interesting cocktails containing Brennivín, so you might want to search for one of those if you’re not a fan of taking shots.

If you drink alcohol, you should try Brennivín at a local bar in Iceland. You might even find it in some liquor stores all over the world. You can also buy a bottle and bring home to impress your friends. 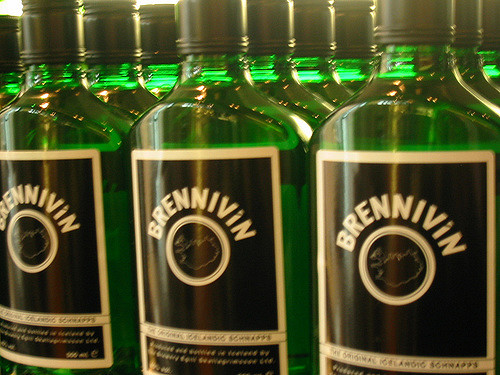