Can you actually buy roasted sheep heads in jelly in stores?

Yes, of course, you can! Who doesn’t like to eat roasted sheep cheeks, tongues, etc., mashed into bits and covered in jelly?

They’re called sviðasulta. Literally: sheep head jam. So if you find yourself in a grocery store in Iceland, make sure you look for it. If you’re in Iceland during Þorri (mid-January until mid-February), you can even buy it fermented.

How do people eat the sheep head jam?

Good question. There’s no one correct way, really. Some people simply slice it up and eat it straight out of the packaging. Some people put it on a flatkaka (flatbread) with butter underneath. Those who are really into this weird food make their own mashed rutabaga, but you can also buy it in a jar at the store.

Is it a popular food in Iceland?

Not really. Mostly it’s popular among the older generation, but young people (with old souls) kind of like it as well on occasion. But it’s popular enough to be sold in all grocery stores.

Can I make it at home? 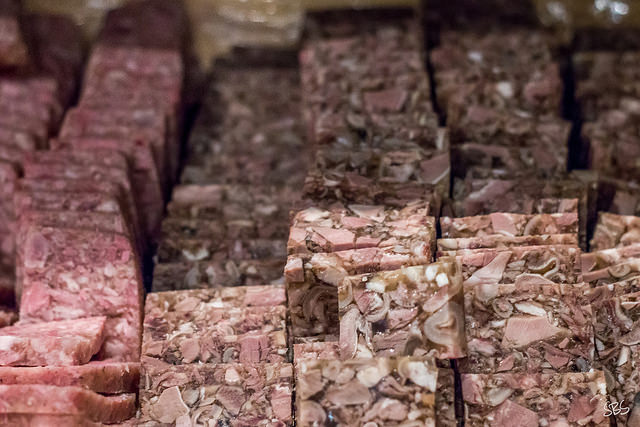 Sure, if you can get your hands on roasted sheep heads, also available in the freezer of every grocery store in Iceland. Here’s a recipe:

Boil three whole roasted sheep heads in as little water as possible, with 1 bay leaf and a bit of salt. Boil for 1.5 hours and make sure you check it once in a while and remove the foam from the edges of the pot. Remove the bones but don’t throw the broth away, chop the meat roughly and place in a form, a bread form, for example. Pour some of the broth over the meat (not too much or it won’t set), place something heavy on top and put in the fridge overnight.

Take the skin off of 1-3 rutabagas and chop into large pieces. Boil them in lightly salted water until they’re soft. Drain and let them stand for a couple of minutes to let steam escape. Add 1-2 tablespoons of butter and mash with a potato masher. If it’s very thick, add cream or milk until you reach a good consistency. Add a couple of teaspoons of sugar and a bit of salt and pepper to taste. You can add a bit of nutmeg for more flavor.