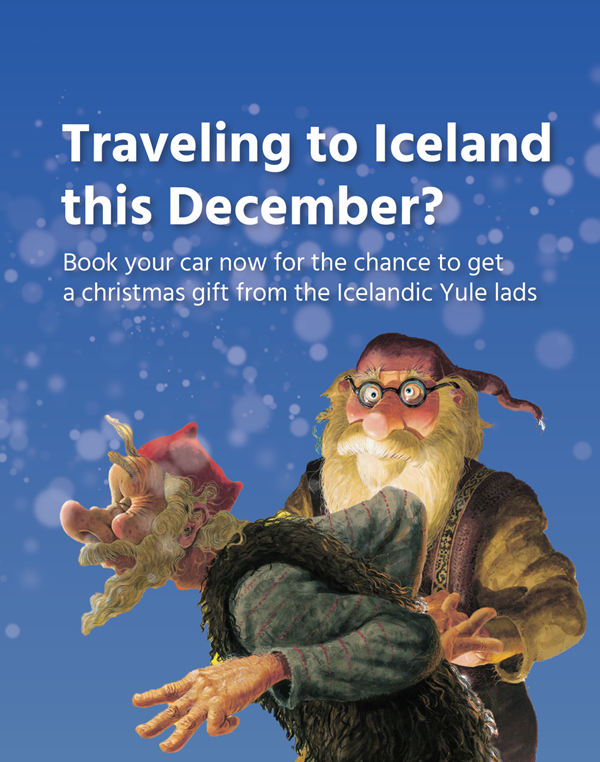 Make a wish to the Yule Lads

Starting on the 12th of December, the Yule Lads come one by one at night time to Icelandic homes, where they leave a little gift in the children’s shoe placed on windowsills. The well-behaved children get a nice gift, but the naughty ones get a potato.

Now you can take part in this fun tradition. If you´re picking up a car with Blue Car Rental in December you can leave a wish for the Yule Lads.

And who knows, maybe the Yule Lads will leave a gift for you when arriving in Iceland.

The Origin of the Yule Lads

One of the strangest Christmas traditions in Iceland is our version of Santa Claus. Here there is not just one Santa Claus, but 13.

They are called the Yule Lads, and each has its own name, characteristics, and identity.

That´s however just the tip of the iceberg. Things are only going to get weirder from here on as we go over this strange Icelandic Christmas tradition.

While you might think having 13 Santa Clauses is every child´s dream, it couldn’t be further from the truth. At least in the original tails of the Yule Lads.

Tails of the Yule Lads have been told in Iceland for generations. One of the earliest written records is in a 17th century poem about Grýla, their evil troll mother.

They are described as an ugly and unpleasant group of brothers living among troll and other foul creatures in the mountains. Only ascending around Christmas to harass people, commit burglary, steal, and vandalize. Basically, nothing but unwanted criminals.

Where do the Yule Lads live?

No one really knows where the Yule Lads actually live. Except just in the mountains of Iceland. There have been many theories in which mountain, but nothing has been confirmed. All that is known is that they live in a cave called Grýluhellir.

Their mother, Grýla, is a viscous troll which eats children. She also appears around Christmas but only to hunt kids which have been bad over the year. Not much is known about their father. Except he is called “Leppalúði” and is probably a troll as well.

The order of the Yule Lads in Iceland

The Yule Lads spilt up in the days leading to Christmas. Ascending from the mountains one by one and in a specific order. Let´s get to know them a little bit better by the order in which they arrive.

December 12: The first one is to arrive is Stekkjastaur (e. Sheep-Cote Clod). He´s the tallest of the Yule Lads and has wooden legs. Causing him to suffer from much stiffness and trouble with movements. Despite his disabilities he is known for sneaking into sheepfolds where he likes to drink sheep milk.

December 13: Second to arrive is Giljagaur (e. Gully Gawk). He is an odd fellow, with a grim face and a grey head. He likes to hide in canyons and sneak into cowshed. There he enjoys sipping the foam of freshly milked cow’s milk.

December 14: The third to arrive is Stúfur (e. Stubby). He is the smallest of the Yule Lads. Most likely a midget. He is the first of the brothers to break into people’s homes. There he goes for the frying pan and enjoys eating the burned bits stuck to the pan.

December 15: The fourth Yule Lad is Þvörusleikir (e. Spoon Licker). He is extremely slander but moves as quickly as a lightning. He is also a home intruder. As the name suggest likes to lick spoons and ladles while invading people’s homes.

December 16: The fifth Yule Lad is Pottaskefill (e. Pot Scraper). He uses diversion to obtain his goal. He knocks on the front door as people have dinner. Once they leave the table to answer the door, he sneaks into the house and licks the pots clean!

December 17: The sixth Yule Lad to ascend from the mountains is Askasleikir (e. Bowl Licker). A burglar like many of his brothers, he hides under people’s beds. Once all residents fall asleep, he rushes to the kitchen and licks the leftovers from dirty bowls.

December 18: The seventh Yule Lad to arrive is Hurðaskellir (e. Door Slammer). This one is not a thief like many of his brothers. Rather than stealing he enjoys harassing people. He waits until dark and just when people are getting ready to sleep, he starts slamming doors with all his might.

December 19: The eight brother to arrive is Skyrgámur (e. Skyr Gobbler). He is a large fella and strong as an ox. Braking into storages using his bare hands to smash his way in. There he goes for skyr, Icelandic curd, and eats until he is about to burst.

December 20: The ninth Yule Lads to come down from the mountains is Bjúgnakrækir (Sausage Snatcher). He is a trickster. Covering himself in soot as he hides in shadows and smokes at peoples ceiling. There he lurks with his hook looking to snatch the finest of sausages he can find.

December 21: The tenth to arrive is Gluggagæir (e. Window peeper). He sneaks around houses and looks through the windows, looking for something to steal. If he sees anything worth taking, he waits until everyone´s asleep so and gets his price.

December 22: The eleventh Yule Lad is Gáttaþefur (e. Doorway Sniffer). He has a very large nose and never catches a cold. With his enormous nose he detects smell from a great distance.  Using this skill, he chooses houses to invade.

December 23. The twelfth Yule Lad to arrive is Ketkrókur (e. Meat Hook). He likes to break into homes by claiming down chimneys. Arriving on Saint Þorlákur day, the day before Christmas Eve, his goal is to snatch some smoked lamb, the traditional Icelandic Christmas dish.

December 24: The thirteenth and last of the Yule Lads to arrive is Kertasníkir (e. Candle Snatcher). He arrives on Christmas Eve and likes to chase children and steal candles from them. He then eats the candles, as they are his favourite food.

The Yule Lads mother is a monstrous child eating troll called Grýla. Grýla is incredible ugly and evil in nature. Like her sons, she only ascends from the mountains around Christmas to terrorise communities around Iceland.

Grýla only hunt children which have misbehaved throughout the year. Those caught end up in her giant sack, never to return. Once she has collected enough children, she takes them back to her cave where she cooks and eats them.

Grýla´s husband is Leppalúði. He lives with her and the Yule lads in the cave. He is said to be Grýla´s third husband and it is not clear if he is the biological father of the Yule Lads. At least not all of them. It is also unclear if he is a troll, a man or something else. What we do know is that he is incredibly lazy and never leaves the comfort of their cave.

Grýla, Leppalúði and the Yule Lads, also have a pet living with them. A giant cat called the Christmas Cat, or the Yule Cat.

This is no ordinary house pet. Far from it! Like so many of Iceland´s Christmas figures he is also a flesh-eating monster.

The Yule cat is enormous and only appears around Christmas. And yes, he also likes to eat children.

There is however a twist in his child eating diet. He is not interested in their behaviour. The Yule Cat only feeds on those which do not get new cloths for Christmas.

What Do the Yule Lads Have Common With Santa Claus?

In Icelandic both Santa Claus and the Yule Lads are called “Jólasveinn” simply meaning a Christmas guy.

That´s perhaps the strongest connection between the classic Santa Claus and the less known Yule Lads of Iceland.

But they do have other similarities, at least in modern times. Such as bringing children gifts while they sleep. Just like Santa Claus, the Yule Lads monitor kids' behaviour and only the good once get a nice gift.

Although the Yule Lads and Santa Claus have a rather different appearance, they do share some similarities. Often depicted with long white beards like that of Santa Claus and tail cap.

That´s pretty much all they have in common.

Although Santa Claus and the Yule Lads are often mixed together in today's Christmas tradition, there is a huge difference between them.

In Iceland children put their shoe in the window to receive a gift from each Yule Lads. One per night, 13 days before Christmas. Whereas Santa Claus leaves a gift in a Christmas sock, for one night only.

These are usually small gifts. Candy, fruits, candles, and such. However, only good children get these kinds of gifts. Those how have been bad, get a potato in the shoe.

The origin and story behind Iceland´s Yule Lads are also completely different than of Santa Claus. In fact, they are totally unrelated.

The Yule Lads do not live on the North pole like Santa Claus. Instead, they live in the mountains of Iceland.

There is no village, elves or a toy factory where they live. Just their troll mother which eats children and their monster cat, which also eats children at Christmas.

The biggest difference is however the fact that the Yule Lads are a group of hooligans and not saints like their collage from the North pole. Although they do bring joy and gifts to children, throughout time they have mostly been known as outlaws, terrorising communities.

Over the years it seems though that the Yule Lads have eased up on their disturbing behaviour and mostly let go of criminal activities.

It is unknown when, but at some point, the Yule Lads apparently decided to clean up their act. Some claim it happened when Grýla, their monstrous mother, died and with her the need for evil deeds.

Some say Grýla is still alive. She just gave up eating kids and as a result the whole family turned a corner.

Despite this turnover, the Yule Lads are still the strange mountain men they have always been. They are just not as scary as they use to be.

As the Yule Lads have become civilized children are less afraid of them. Today children look forward putting their shoe in the window and waking up to a gift from one of the lads. Unless they have been bad and wake up with a potato in their shoe.

Instead of fearing the Yule Lads, many rather try to befriend them. Leaving Skyr, candles, spoons and other things they like to feast on in the window.

This has proven highly successful as stealing and harassment from the Yule lads has reduces significantly over the years. With the improved behaviour so has the gifts and general attitude towards the brothers as well.

This new and improved attitude has truly turned the public opinion on the Yule Lads. Not only are they now socially accepted, but beloved public figures.

While letting go of their old ways they have focused more on their artistic side. This has proven highly successful for the Yule Lads.

Today they are among the most popular musicians in Iceland. Appearing at town festivals and private events all over the country in the days around Christmas. 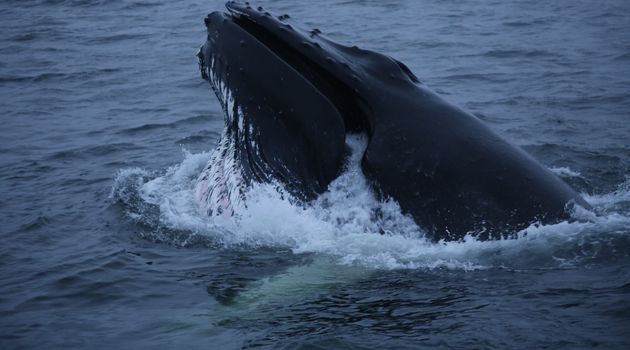 You´ll not only see the magnificent whales, but the rich bird life in the lava cliffs as well! We´ll take you along the coastline, and show you guillemots, arctic skua, gannets, and other species. The whales are glorious creatures and you´ll surely enjoy the ride.